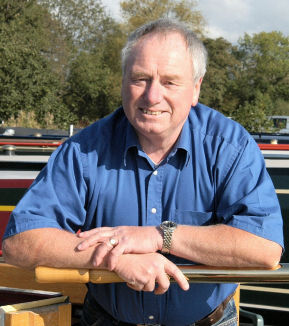 It is with great sadness that we have to inform you that our President, Harry Arnold, passed away in November, following a stroke.

His funeral was held on the 13 November in Fradley, near Lichfield, and the large numbers who attended reflected the respect and admiration in which he was held.

On behalf of the Committee and all Members of the Society, we extend our sincere condolences to Harry's wife and family, Beryl, Julie and Michael, and all his many friends and colleagues. He will be greatly missed but will always remain in our thoughts.

Harry was born in May 1937 and lived in Stockton Heath on the Cheshire side of the Manchester Ship Canal, close to the Bridgewater canal. His family was from Sankey Bridges his mother we believe being one of 22 children, and his father worked at Crosfield's which had their own transporter bridge, now a Listed Building. Waterways ran in the family, with a grandfather who worked on the construction of the Manchester Ship Canal and a great-grandfather who was skipper of a Mersey Sailing Flat as well as motor barges trading on the waterways of Merseyside and the Irish Sea.

Eddie Frangleton, Saturn member and former Society Secretary, a close friend of Harry's from the age of 11, recalls meeting him in the first year at Grammar School (1948), in Warrington from there onwards began a life-long friendship, sharing a common interest in railways and canals from that early age.

At school, Harry joined the photographic society where he developed a natural flair for composition and drawing. Having volunteered to process school photographs, he gained access to the darkroom facilities for some of his own work and so began his future in photojournalism as a writer and as a waterways historian.

Then followed National Service with the Royal Artillery, stationed at Aldershot and later, Oswestry.

Harry married his wife, Beryl, in June 1959 and left the Army in 1960. In the same year he experienced his first canal boating trip where, by chance, he photographed the horse-drawn hostel narrowboat, Margaret, emerging from Preston Brook tunnel. This signalled the beginning of his involvement with hostel boats based in Manchester, and the wider leisure industry, together with an enduring love of waterways.

Harry had a strong affinity with the Shropshire Union Canal network , its boats and way of life which began by his association with the Hostelcraft company in the early 1960's and through meeting Jack Roberts, captain of their horse-drawn narrowboat. This led Harry to encourage Jack, who had a phenomenal memory of his early working life with the Shropshire Union Company, to record those experiences. The result of which, 50 years later, produced the definitive book on Shropshire Union Fly Boats, which many of you will recall was launched on Saturn at Audlem a few years ago.

In 1965 Harry worked in the canal holiday business at Norbury Junction and became involved with the local canal restoration movement; first for the Newport and Shrewsbury Group which became the Shropshire Union Canal Society; the Montgomery Canal; The Waterway Recovery Group; The Inland Waterways Association and many more. Since 1968 Harry and his family have lived by the Trent & Mersey Canal at Alrewas, near Lichfield. However the Shropshire Union remained of key importance to him.

By the 1980's Harry was instrumental in acquiring the Shropshire Union boat, Symbol, in an attempt to save her from dereliction, to be based at the then Boat Museum (now The National Waterways Museum) at Ellesmere Port, of which Harry was a founder member in the early 1970's. The move to Ellesmere Port however was not possible as the Museum already had a large 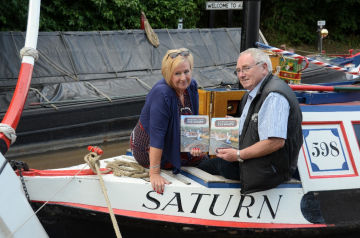 Collection of boats needing attention, and so with the help of other friends and Saturn members, the late Rob Davies, (who most of you are aware also sadly died last year) and Tony Lewery, a new group was established - The Shropshire Union Fly-Boat Restoration Society - with the unusual aim of using their expertise and contacts to raise money to compete the restoration work professionally - not just with volunteer help.

Above, Harry with one of Jack Roberts' daughters at the launch of his book, Audlem - photo Bob Jervis

Symbol was eventually moored at Trevor with the hope of substantial grants and financial support from the Welsh authorities, however, this failed to materialise and Symbol had to be dismantled. Not to be deterred, and with Harry's unwavering commitment as Chairman of SUFBRS, plus his extensive contacts in the world of waterways, the Society formed a new partnership with British Waterways, who purchased Saturn and applied, successfully, for a major Heritage Lottery Fund grant to begin restoration work on this last remaining fly-boat. This could not have been achieved without Harry's determination, vision and tenacity, and as such is part of his lasting legacy to protect the heritage of Britain s Inland Waterways.

Harry produced many waterway publications and wrote two books - The Montgomery Canal and The Llangollen Canal - and we understand more were in the pipeline. Due to his specialist knowledge, Harry regularly acted as consultant and contributor to various publications, broadcasts and video productions for the BBC and independent production companies. However, he combined this with giving his time voluntarily serving in many capacities such as President, Chairman for over 20 years, Newsletter contributor, campaigner and activist to The Saturn Project and other organisations. In 2008 he became a Vice-President of The Inland Waterways Association, whose magazine he had edited for 17 years.

In 2010 Harry was awarded an MBE in HM the Queen's Birthday Honours List, for his outstanding contribution to the waterways over almost 50 years. In 2015, Canal & River Trust Chief Executive, Richard Parry, awarded Harry the Living Waterways Lifetime Achievement Award, saying that he was honoured to be able to acknowledge Harry's dedication and there could be few more worthy recipients. Harry never stopped working and was still contributing to the Saturn Newsletter within the last few issues with articles and photographs - always generous to share his extensive knowledge, information and contacts. We will miss this resource, but as Harry and his family, especially daughter, Julie, have always been involved with waterways we are sure his legacy, literature and photographic records will continue to be preserved.

Typically, Harry, always busy, usually ended emails etc. with '... must rush'. It is hard to believe that we have read those words for the last time.